Frederick is a short film that begs the question: "How far would you go for your art?" The film is directed by Traci Hays and is written, produced, and starring Josh Mann. Through my company, Sageous Studios, LLC, I have produced some of the VFX that was required for the film. Below is an example of some of the VFX that was done on this project. In this example, directing, filming, and integrating extras into the scene, adding in a muzzle-flash and recoil effects to the gun shot were all necessary to give the final look of the film. The film is currently running through festivals--so check and see if it will be screening in your area.

The Jimmy Fallon ride has been up and running at Universal Studios Orlando and I had the pleasure of doing previsualization on sections of the ride while at The Third Floor, Inc. Thankfully, the ride looks very close to how the previsualization looked and stands as a testament to its importance of previs in developing a project. Check out more information on the ride below! 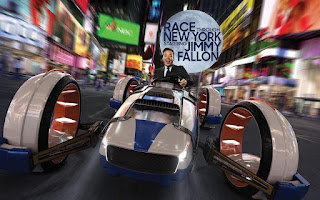